Protests in NYC and across U.S. in solidarity with Baltimore demonstrations 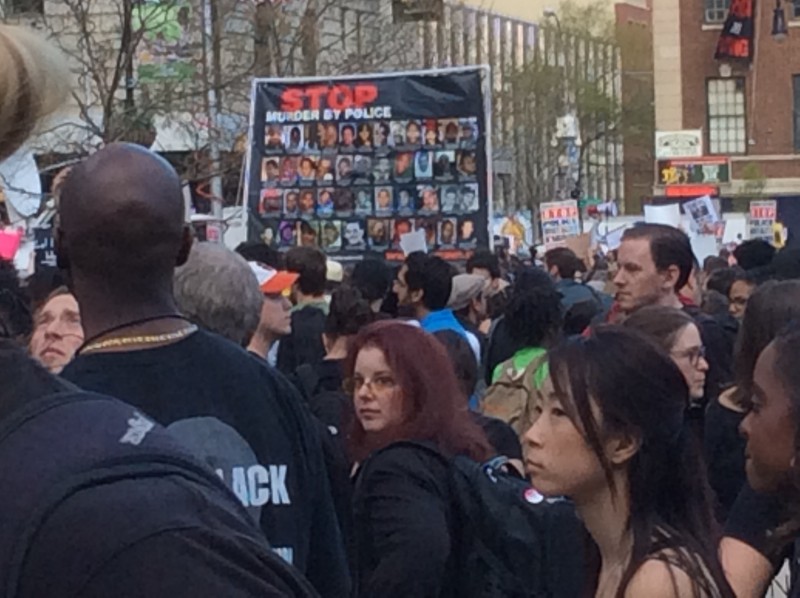 The Baltimore Police Department has turned over the results of their internal investigation into the death of Freddie Gray to the state attorney’s office. Maryland chief prosecutor Marilyn Mosby says the BPD probe will be only one of the factors she will consider regarding possible indictments and that her office is conducting its own review.

Protests continue around the country in solidarity with Baltimore residents calling for city officials to conduct a full investigation into the death of Freddie Gray. On Friday, May 1st rallies are scheduled in cities from Miami to Seattle. Protests in New York City have already started, Linda Perry Barr reports.

There was Black Lives Matter rally at Union Square in Manhattan Wednesday night to protest the death of Freddie Gray. The Baltimore man died April 19 as a result of spinal injuries suffered while in police custody. Feelings were pretty raw and young black women were speaking out.

Sabat Jordan with the Black Youth Project says she is exhausted by what she hears about Baltimore. “I’m tired of hearing the same story over and over, I’m tired of feeling the same pain,” she told a group of supportive onlookers. “I’m tired of looking at people who look like they could be my brother or my boyfriend or my uncle or my son. I’m exhausted of it.”

Jordan adds that the exhaustion also comes with another feeling: “I’m proud that we are as a country saying ‘enough is enough’. I’m proud that we are saying we are no longer going to sit at home, sit on our asses, sit in our offices and watch as a whole race of people is terrorized and brutalized by the people who are supposed to be protecting and serving us. I’m proud to see everybody out here who is standing up for justice.”

Thousands of people hit the streets in Baltimore, Ferguson and several other cities. New York City, more than 100 people were arrested Wednesday night.