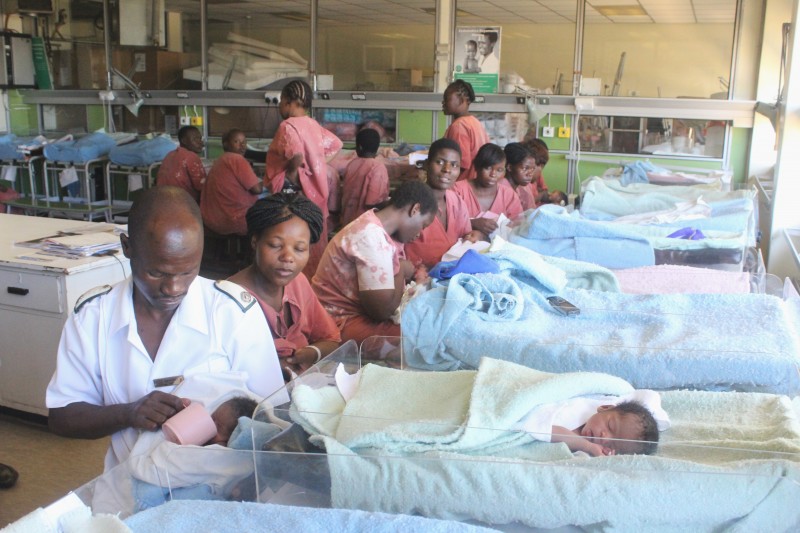 Feeding time at Harrare Hospital, where according to UNICEF about 90 per cent of HIV infections in infants and children are passed on by their mothers during pregnancy, delivery or breastfeeding. (Photo Credit: Garikai Chaunza)

In Zimbabwe, people living with HIV/AIDS have launched a program to monitor the health care they receive in order to trace the gaps, shortcomings and loopholes in access and availability to services. Government records show that nearly one-tenth of Zimbabwe’s population of 13 million lives with the virus. Of those only half  receive regular treatment, according to the Ministry of Health and Child Care. FSRN’s Garikai Chaunza reports from Harare.

Almost 1.3 million people in Zimbabwe are HIV-positive. Most receive treatment at government hospitals or local public clinics. Essential services for people living with HIV/AIDS include access to anti-retroviral drugs (ARVs), CD4 count machines to determine one’s viral load and information on how to take ARVs once diagnosed.

But thirty years after the virus exploded into an international pandemic, complaints about facing stigma and discrimination from health care workers in the country remain common.

It is against this backdrop that the advocacy organization the Zimbabwe HIV and AIDS Activist Union Community Trust launched an initiative, with government permission, to monitor the provision of AIDS services throughout the country. President of the organization Stanly Takaona, himself HIV positive, says local community monitors will make regular visits to health care centers and report any problems in the administration of AIDS services.

Earlier this year, the government switched patients from the first line of AIDS treatment after discovering the medications used were causing severe side effects. Many patients were also forgetting to take the pills three times a day. The switch over to a single dose regimen has been welcomed by many, but now there’s a shortage of the Indian-manufactured medication.

Shylet Chifaka, a 23-year-old AIDS activist, says patients in hard-to-reach areas like farming and mining communities are missing out on treatment.

“The supply is very low,” Chifaka says. “So I would love to encourage the ministry of health to deal with that, so that the tablets will be available in time.”

There are also thousands of people who are living in camps after they were displaced by the government, some are people living with HIV who are also losing out on treatment.

Ishmael Tauya is one of them. He lives at Caledonia farm, a settlement established ten years ago after a government operation displaced and relocated thousands of poor people from urban slums to rural areas. Tauya says at Caledonia they used to get ARVs from a mobile clinic operated by Doctors without Borders, but the medical NGO’s license to operate in Zimbabwe expired last year. The NGO transferred its caseload to local authorities.
Since then, he says, services have declined.

“We really know that they [the government] do not have resources, but to some extent we know they are partners who are coming to compliment programs they have in place, but we are calling them to prioritize internally displaced populations so that they are also able to do monitoring and be capacitated in their own settings.”

Sebastian Chinhaire with the Zimbabwe National Network for People Living with HIV says the fees government hospitals charge for ARVs force many to skip doses of medication.

“Of concern to us as people living with HIV is the issue of consultation fees which is also referred to as user fees,” Chinhaire explains. “Most of our members are the poorest of the poor. They cannot afford even a dollar for user fee or consultation fee, but the hospitals still insist that they still have to have that if they do not have money they are referred to the social services and given useless papers which are said to be social services exemption papers which in turn are also rejected by the hospitals and people end up going home without getting treatment for opportunistic infections.”

Dr. Owen Mugurungi, head of the TB, HIV and AIDS Unit in the Ministry of Health and Child Care,  says the AIDS department started the year with a $100 million deficit and pins funding hopes on the donor community.

“One of the best ways of mobilizing that is to go out there and negotiate for price reduction because most of that money is required for ARVs,” according to Mugurungi,  who blames the economy for the problems cited by AIDS patients. “So if you get substantial reduction in prices of ARVs then that will be the first step. But we hope we can mobilize the private sector and other people to get involved to make sure that we get there.”

But despite its limited resources, Zimbabwe has done well in managing the incidence of HIV. It has reduced the prevalence of the pandemic from 27 % in 1997 to 15% thanks to a multi-pronged strategy which includes AIDS awareness campaigns, free AIDS testing for pregnant mothers and measures to prevent the transmission of the virus from mother to child. On top of donor funding, the country has a domestic program to combat HIV/AIDS funded by a three percent tax deducted from formal workers’ monthly salaries.