U.S. immigration authorities begin a new round of deportation raids 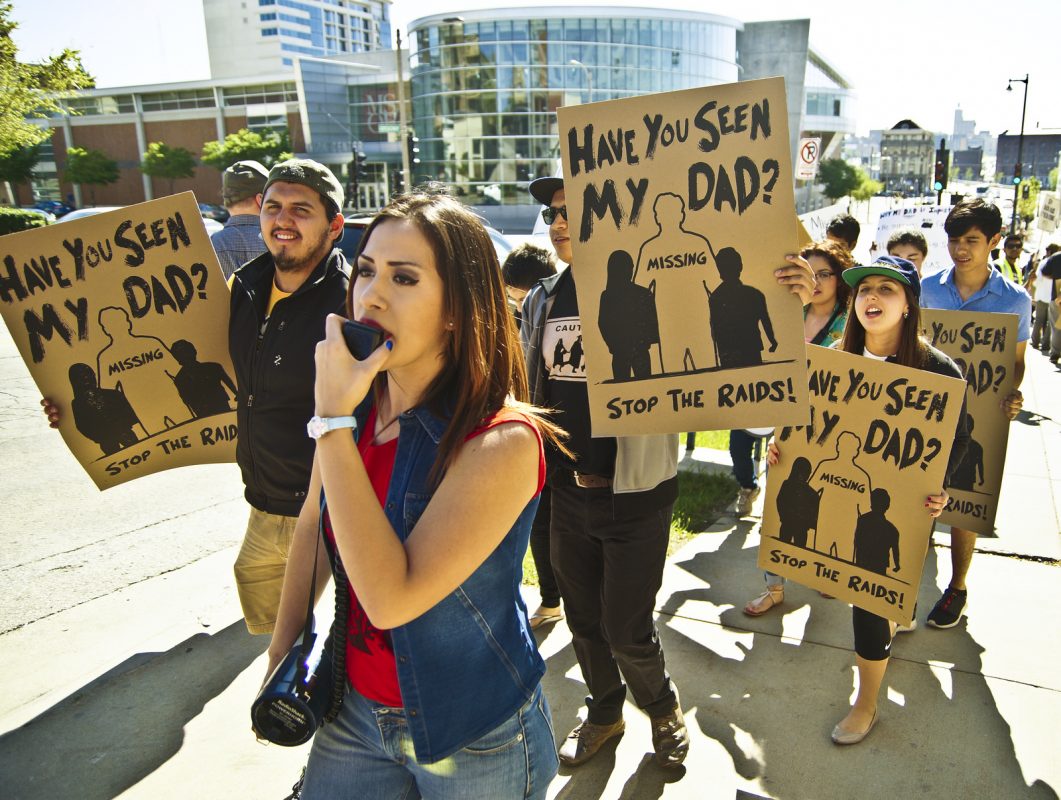 Immigrant families rally outside of ICE offices in Wisconsin in May of 2014. (Photo credit: Joe Brusky via Flickr/Creative Commons)

Department of Homeland Security Secretary Jeh Johnson begins a two-day visit to El Salvador and Honduras Thursday. His trip comes as U.S. immigration authorities under his mandate have started another round of deportation raids. Among those targeted for removal? Central American families who have arrived since the start of 2014. The Obama Administration calls the raids part of a security strategy, aimed at deterring another “surge” of Central American women and children along the southern border. But immigration rights advocates say authorities are deliberately refusing to recognize a refugee crisis at the nation’s doorstep. Shannon Young has more.

Few things send waves of fear through immigrant communities like deportation raids. So when Reuters reported last Thursday that a new round of raids was in the works, it immediately grabbed the attention of immigrant advocacy organizations.

Immigration and Customs Enforcement and the Department of Homeland Security have offered little in the way of details, but White House spokesperson Josh Earnest confirmed the plans in a briefing last Friday, saying: “… the operations that are underway are merely the continuation of operations that were announced in January and in March. And those operations are conducted under the rubric of the guidance that President Obama and Secretary Johnson put in place in November of 2014. And that is guidance that made a priority of individuals who are convicted criminals or otherwise a threat to public safety, or individuals who were apprehended after crossing the border after January 1st of 2014.”

The latter category includes a significant influx of Central American women and children who applied for – but did not obtain – asylum status.

“The administration is telling us that they are only focusing on children and families with final orders and that they have had an opportunity to request this protection,” explains Michelle Brané, the director of the Migrant Rights & Justice Program at the Women’s Refugee Commission. “However, what’s been very clear from the last round of raids is that this is not consistently the case.”

She says that due process is generally lacking in the asylum proceedings in which women and children often have to make their claims in an unfamiliar system without the help of an attorney.

The immigration court system does not provide public defenders for those who can’t afford legal representation, leading advocates to compare the asylum claim process to traffic court rules with death penalty consequences.

When the numbers of Central American women and children arriving on the southern border increased dramatically in 2014, the Obama administration implemented a number of policies purportedly aimed at deterrence. These included returning to the controversial practice of detaining women and children in for-profit detention centers for months at a time. Two such facilities opened in South Texas for just that purpose.

The administration also began media campaigns in Honduras, El Salvador and Guatemala, sending a message that U.S. borders were not open. Yet, the families keep coming.

Dr. Jonathan T. Hiskey, an Associate Professor of Political Science at Vanderbilt University, authored a recent study on the Central American refugee crisis. He says surveys conducted in El Salvador and Honduras show that people who flee the region are aware of the risks, but other push factors outweigh the U.S. deterrence campaign.

“First, we have strong evidence that this U.S. ‘send a message’ campaign, if you will, has been heard loud and clear in terms of convincing Central Americans that the risks of migration to the U.S. have never been higher and that the chances for success have never been lower,” Hiskey told reporters on a conference call Wednesday. “Our second main finding, however, is that for these same survey respondents, knowledge of the increased risk of migrating to the U.S. and the increased risk of deportation has no impact whatsoever on their decision to migrate. Rather, the overwhelming predictor of someone in Honduras or El Salvador expressing a desire to emigrate is whether or not that person has been victimized by crime in the previous year.”

In January of this year, Secretary of State John Kerry announced a new initiative that would screen Central American asylum applicants in their countries of origin. But according to Joanne Kelsey of the Lutheran Immigration and Refugee Service, this new program has yet to benefit a single person with legal entry into the United States.

Immigrant and refugee advocacy groups are calling on the Obama Administration to start treating Central American women and children who pass the government’s own credible fear test as refugees rather than economic migrants or national security threats.