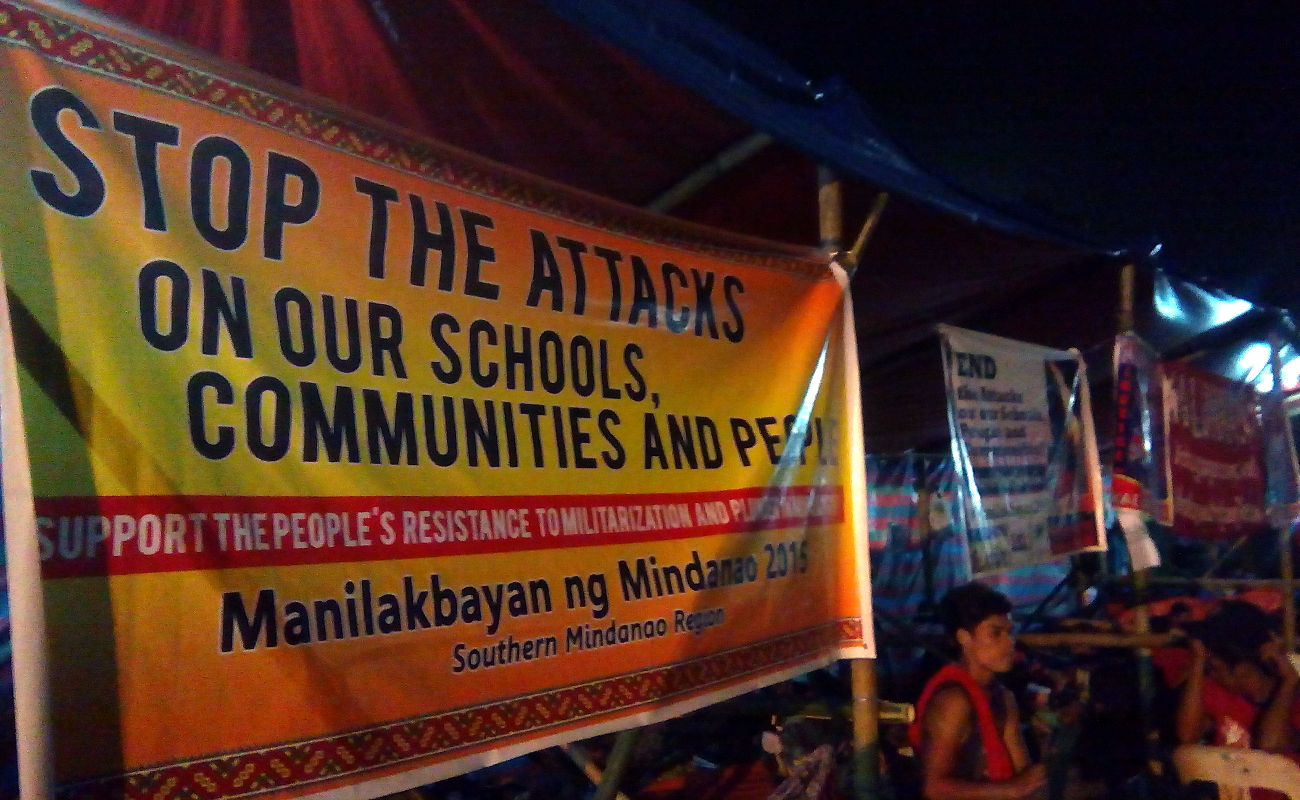 Hundreds of indigenous Lumads have marched to Manila from Mindanao in southern Philippines to call attention to a spate of recent attacks and killings targeting members of their tribe.

The month-long walk started on October 26th and included several pauses for a protest along the way. They plan to call international attention to their issues when Manila hosts the Asia-Pacific Economic Cooperation summit of regional leaders next week. Robert Packard reads for Madonna Virola in Quezon City.

In one of the stops in their walk from Mindanao to Manila, hundreds of indigenous Lumads and their supporters camped for one week at the grounds of the University of the Philippines.

They want to draw attention to violent land grabs within their traditional territory and call on the authorities to investigate and punish recent killings of Lumad land defenders.

Among the dead is Lumad leader Dionel Campos. He was killed on September 1st in a tribal school in the Lianga Surigao del Norte village in the southern Philippines.

His daughter, Michelle Campos, believes paramilitaries known as the Mahagat Bagani are responsible.

”It was dawn when a group of armed men knocked hard on the doors [of the school], threatening to gun people down if they didn’t gather in the basketball court,” recalls Michelle Campos. “My three younger sisters saw the paramilitary forces shoot my father in the head. The children were terrified. They threatened to massacre people if they didn’t leave the area.”

Michelle Campos said her father was actively opposing the incursion of mining interests into their ancestral lands.

Activists have documented five massacres targeting Lumads during the present administration. The violence has displaced thousands more Lumads from their territory.

“’The Aquino regime is implementing a counterinsurgency operational plan named before the US counterinsurgency methodology which is Oplan Bayanihan,” says Ariel Casilao of the activist group Anakpawis who has been traveling with the march since Mindanao. “The problem is wherein people, groups, or organizations that are critical to this government, protesting large scale intrusion to their ancestral lands because of large scale foreign projects like mining, logging, agricorporations, plantations, people are protesting and they are being vilified, they are being tagged as communist or fronts or members or sympathizers of revolutionary group New People’s Army.”

He says Lumad schools in particular have been the targets of multiple attacks. He adds Lumad supporters are facing trumped-up charges and surveillance, including himself.

But, Alejo points out, violence against Lumads is rarely investigated or prosecuted, meaning that perpetrators can expect to be able to operate with impunity.

U.N. Special Rapporteur on the Rights of Indigenous Peoples Victoria Tauli-Corpuz has urged action on stalled peace talks between the government, the New People’s Army and the National Democratic Front – different sides of an armed conflict in an area that includes the Lumad’s ancestral territory.

”I would strongly recommend that a mechanism where a joint monitoring and investigation could happen. And the facts would really come out, and based on those facts, there would be subsequent discussions on how to deal with that kind of situations,” said Tauli-Corpuz in a recent speech.

Back at the People’s Camp, Michelle Campos says life is more difficult without her father, but she will complete her studies, stand up for her family and demand justice for her father and her community.

“This is what my father wants. Education is important. It gives honor to us Lumads,” explains Michelle Campos. “It is sacred, it teaches us our rights, why we should protect our ancestral land, not to be discriminated and to progress as a people.”

The Lumads are camping at the Liwasang Bonifacio plaza in Manila ahead of next week’s APEC summit. They say if pushed away, they will continue their protests for international guests to see.