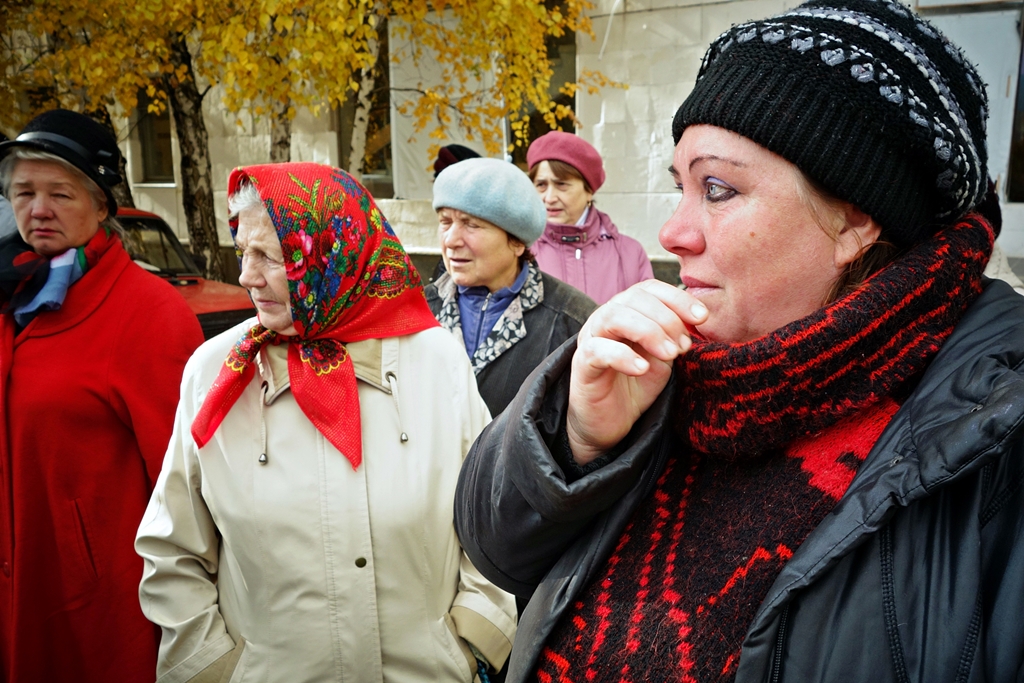 Vera Mihailova Kopeinika is a 50-year-old disabled woman who lives with her husband and son, both unemployed miners. (Photo credit: Filip Warwick)

Three-way trade talks between the Russia, Ukraine and the EU failed Tuesday, but negotiators agreed to keep the door open on further discussions about the Ukraine-EU deal. Moscow opposes the agreement and uncertainty in Ukraine about the deal led to protests in 2013 that saw then-president Viktor Yanukovich ousted from office followed by Russia’s annexation of the Crimean peninsula. The trade deal is one component in the ongoing tension in the region.

Hostilities continue in eastern Ukraine where conflict, displacement and vulnerability are creating conditions ripe for humanitarian disaster. And as temperatures begin to drop, face food shortages and rising debts are growing. According to the European Commission, 5 million people require humanitarian aid, with 1.3 million in need of food assistance. Thousands of vulnerable people continue to live close to the front line where lack of employment opportunities and rising prices tie civilians to a debtor’s existence. FSRN’s Filip Warwick reports.

The United Nations’ World Food Program estimates 670,000 people in eastern Ukraine are in urgent need of food assistance. But bureaucracy and accreditation disputes are creating aid distribution hurdles, especially in the pro-Russian separatist-held areas of the Donetsk and Luhansk People’s Republics, or as the central government in Kiev calls them, non-government controlled areas.

In many front line areas, little to no reconstruction of the shattered infrastructure has taken place. In separatist controlled territory, banks, ATM’s and credit cards are not operational because Kiev cut off all access to financial institutions back in November of last year.

“If you have a situation where there are people that are in desperate need but have many debts, you don’t go into cash assistance,” explains Guido van Heugten, WFP EU Visibility & Reporting Officer. “For example, here in government controlled areas financial institutions and shops are still working functioning, so you can look into cash and vouchers modality but for example in non-governmental areas, its parcels.”

In July 2015, pro-Russian separatists expelled all humanitarian organizations and forced them to re-apply for new accreditation. However, the United Nations does not recognize the two separatist republics, which keeps the WFP out of the area.

Zulfia Sabir, head of the WFP Kramatorsk office explains, saying, “In general, it’s very slow. Even if you want to move anything it will take five to six weeks best case scenario. If we talk with our security, security claims that part of that road is in very very bad condition, so it’s very insecure.”

Some families who fled the area during shelling have come back, but employment and income are challenges. And some are even facing debts that accumulated without their knowledge during their absence.

Vera Mihailova Kopeinika is a 50-year-old disabled woman who lives with her husband and son, both unemployed miners. When the bombing started the family took shelter in the Soviet bloc basement but when the shelling intensified they left town. She recently returned and now faces a large gas bill.

Kopeinika’s family lives in an area known as the Donbas. Many of its once-famous coal mines were destroyed in the shelling, thereby crippling the prospects for economic recovery.

Larisa Kobzarenko, project manager of the Adventist Development and Relief Agency – or ADRA – a NGO partner of the WFP, says the lack of food last winter drove some families to extreme measures.

“Last winter we had a terrible situation in the Luhansk area. We were working there, we were distributing food parcels with the WFP. There were several examples of people eating rats, in the center of Europe. In the 21th century, people are eating rats because they were hungry,” Kobzarenko recalls.

There’s the issue of people who may need aid not being able to qualify for it. Kobzarenko acknowledges that some locals living in damaged housing in government-held territory are not considered internally-displaced persons by local Ukrainian authorities, which makes them ineligible for humanitarian aid.

Single mother, Tania Mihailovna, 27, musters a smile when explaining her current situation. She says her food prices have doubled over the past 12 months and 90 percent of her salary goes to paying her utilities bills and heating; she’s left with $6 for the whole month.

With daily ceasefire violations noted over the past two weeks the likelihood of IDP’s returning home grows slimmer by the day. Hushnid Sattarov, head of the PIN Slavyansk office, nonetheless remains optimistic.

“If the situation stabilizes then people will be going back to the front line areas, and there will reviving their income generation activities, like planting their own vegetables and some things, they’ll go back if there’s no shelling or they’ll start up with their farming and everything,” says Sattarov.

With high unemployment, little access to new work and no sign of the Kiev government stepping in, the World Food Program and its NGO partners may have to dig in for the long-haul.