President Obama’s final State of the Union leaves much unsaid 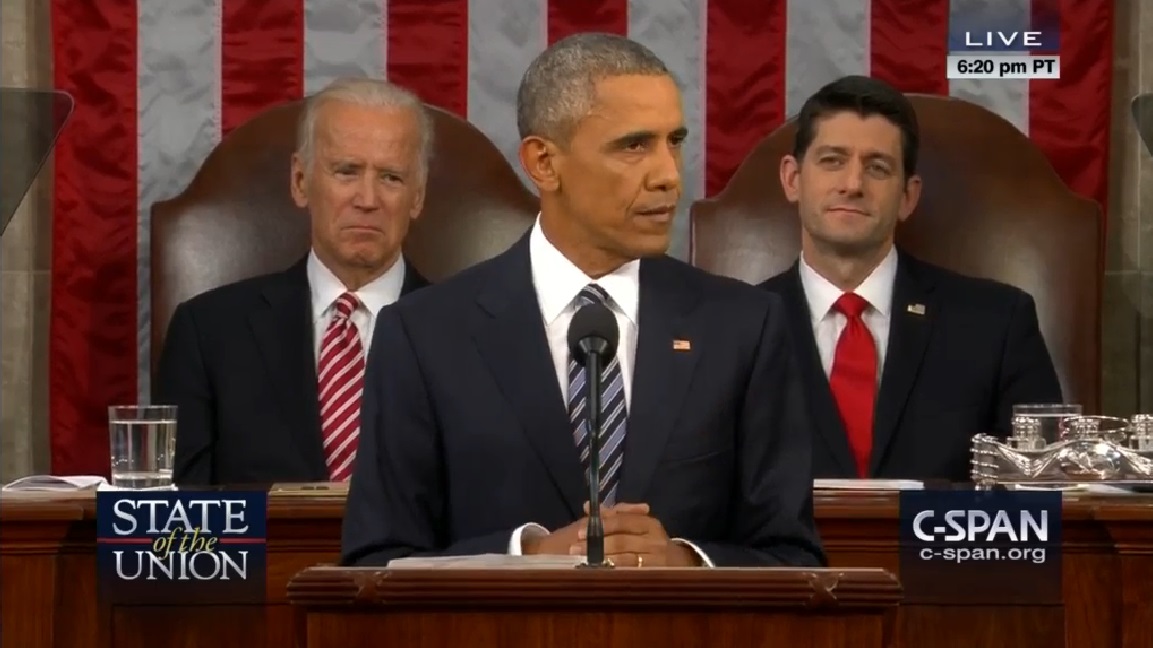 U.S. President Barack Obama delivered his seventh and final State of the Union address last night to a joint session of Congress in a chamber filled with guests. The speech was crafted around four central themes – the economy, technology and climate change, international policy and domestic politics – yet many central issues the country is grappling with were glaringly absent from his remarks. FSRN’s Nell Abram has more.

In addressing the U.S. economy, Obama disputed claims that overall financial health in the country is faltering saying that anyone saying otherwise is “peddling fiction.”

“The United States of America, right now, has the strongest, most durable economy in the world,” Obama said. “We’re in the middle of the longest streak of private sector job creation in history.”

But Obama acknowledged that most people in the United States are still “without a basic measure of security.”

“It’s not too much of a stretch to say that some of the only people in America who are going to work the same job, in the same place, with a health and retirement package for 30 years are sitting in this chamber,” he told the joint session of Congress.

Noting that lawmakers are entering campaign season full-tilt and not much will be accomplished on Capitol Hill in the coming year, the president still called for U.S. lawmakers to cast a vote on a number of issues including lifting the embargo on Cuba and authorizing military action against ISIS. While damping the rhetoric that terror networks are a threat to US “national existence,” Obama detailed the measures the U.S. is undertaking to combat militant jihadism – including an aerial bombing campaign in addition to training and arming local ground forces.

But he called for more: “If this Congress is serious about winning this war, and wants to send a message to our troops and the world, authorize the use of military force against ISIL. Take a vote. Take a vote.”

The president also cautioned against conflating terrorism with Islam.

But Obama did not directly address the ongoing war in Afghanistan, the controversial drone program, the civil-war in Syria or the expansive refugee crisis engulfing Europe.

A number of major domestic issues were also largely absent from the speech, despite oblique or symbolic references. Obama did not mention his executive orders on either gun-control or immigration reform. There was no acknowledgment of racial inequality across any number of sectors nor did he mention the growing demand for increased police accountability in the country.

After his speech, Obama withdrew from the chamber with ceremonial handshakes, hugs and autograph signings. And as always, following the president’s speech a representative from the minority party also addressed the nation.

This year it was Republican South Carolina Governor Nikki Haley, who countered President Obama’s claims that the “state of our union is strong.”

“As he enters his final year in office, many Americans are still feeling the squeeze of an economy too weak to raise income levels,” Governor Haley said. “We’re feeling a crushing national debt, a health care plan that has made insurance less affordable and doctors less available, and chaotic unrest in many of our cities.”

Governor Haley also contradicted Obama with respect to the U.S. role in combating al-Qaeda and ISIS, saying that the president has been “either unwilling or unable” to deal with what she calls the “the most dangerous terrorist threat our nation has seen since September 11th.”

2017 should bring a reprieve from the annual State of the Union, as newly inaugurated presidents generally skip the first year.