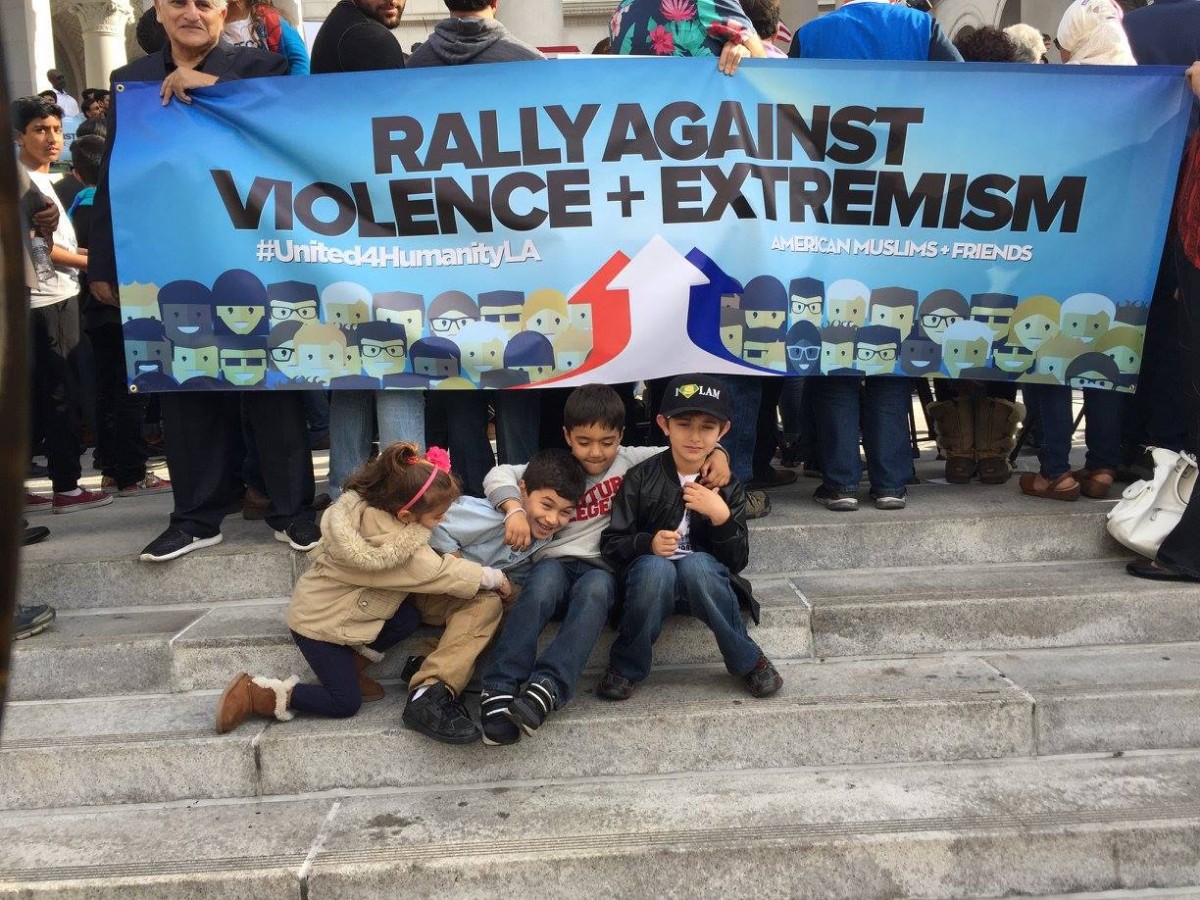 All Saints Episcopal Church participated in a multi-group rally against extremism and violence in Los Angeles during December, 2015. (Photo credit: Larry Buhl)

Among the topics President Barack Obama is expected to address during the State of the Union address tonight is the U.S. role in resettling refugees fleeing violence in Syria and Iraq.  As a symbolic statement, a Syrian refugee has been invited to sit next to the First Lady during the address.

Last week, Alabama became the second state – after Texas – to sue the federal government regarding  refugee placement. The governors say the Obama administration has not consulted with their states about which refugees would be settled there. The recent arrest of two Iraqi refugees on terror-related charges have underscored the argument for some that the U.S. is neglecting national security.

But supporters of the U.S. resettlement program say refugees are being used as a political football. And local communities are still welcoming refugees from Syria and elsewhere, even increasing their efforts to be inviting and inclusive. Larry Buhl has more from Pasadena, California.

Immediately after the November attacks in Paris, reports circulated that one of those responsible had entered Europe with a Syrian passport. That passport turned out to be fake, but the damage was done.

More than half of U.S. governors vowed to block Syrian refugees from settling their states, and some GOP presidential hopefuls suggested the U.S. allow only Christian refugees.

A month later, when it was learned that one of the perpetrators of the mass shooting in San Bernardino California, Tashfeen Maleek, came to the U.S. on a K-1 fiancee visa, Congress moved swiftly to prohibit visa waivers for people who had visited Syria, Iran, Iraq or Sudan in the last five years.

“We believe that the people who are spouting such hateful rhetoric about Muslims and about Syrian refugees is a vocal minority,” says Naomi Steinberg, Director of Refugee Council USA. She adds that the political climate into which Syrian refugees are arriving is a very different one than several months ago, but cautions that’s only part of the story.

“We know based on the output for support for Syrian refugees at local levels around the country that that is the real story about refugee resettlement and those voices are actually much, much stronger, and number much, much higher, than the other perspectives that are getting so much attention,” explains Steinberg.

While governors and federal lawmakers are trying to put up barriers to entry, mayors of U.S. cities including Chicago, Detroit and Austin, Texas are reaffirming their commitment to welcome refugees.

Supporters of refugee resettlement in the U.S. are trying to counter the misconception that it’s easy for a terrorist to sneak in through the program. They point out that refugees are the most thoroughly vetted travelers to the U.S., and that the stringent background checks can take up to three years.

For refugees, getting to the U.S. is only half the journey to establishing a new life. Once in the U.S., they must attend orientation programs run by a coalition of nonprofits and faith-based groups. They also receive some federal funds to put down roots. But for everything else they must rely on themselves and the kindness of strangers.

“It’s not easy to be a refugee in the U.S. Unlike Europe we don’t provide a lot of help once people make it in,” says Hussam Ayloush, director of the Council on American-Islamic Relations in Los Angeles. “For the first few months, we help with living expenses but after that they are almost left on their own to pick up on the language and do whatever it takes to get a job and so on.”

Nonprofits and local mosques and churches have been helping refugees transition to a country that’s safer, but where they have no ties and find very little that’s familiar.

Juliana Serrano is Senior Associate for Peace and Justice in the office for creative connections at All Saints Episcopal Church in Pasadena, California. That church is part of a growing faith community stepping up efforts to help.

A week before the Paris attacks All Saints got a call from the Episcopal Diocese of Los Angeles, saying they had a Syrian family that completed the vetting process and needed a place to live and a sponsor immediately, and that they knew nobody in area.

The church said yes. The next steps were helping them finding an apartment in a safe and comfortable neighborhood, get them started in English and, most urgently, find medical services for the mother, who was then eight months pregnant.

Serrano says that she has heard some voices in their community questioning their actions, but that most of the sentiment was firmly on the side of welcoming refugees, even beyond the bounds of their progressive church.

“We have deep and profound ties with our brothers and sisters in the Muslim community and we believe they are no different then we are and therefore, when in need we are called to serve and support,” Serrano says.

According to the State Department, the U.S. has taken in just under 3,000 Syrian refugees since the Syrian civil war began in 2011. That number is dwarfed by more than a million who have sought asylum in Europe.

The Obama administration maintains that states cannot block refugees and it continues to praise the robustness of the refugee vetting process. The administration says that it will continue to accept refugees from Syria and Iraq, despite resistance from lawmakers.