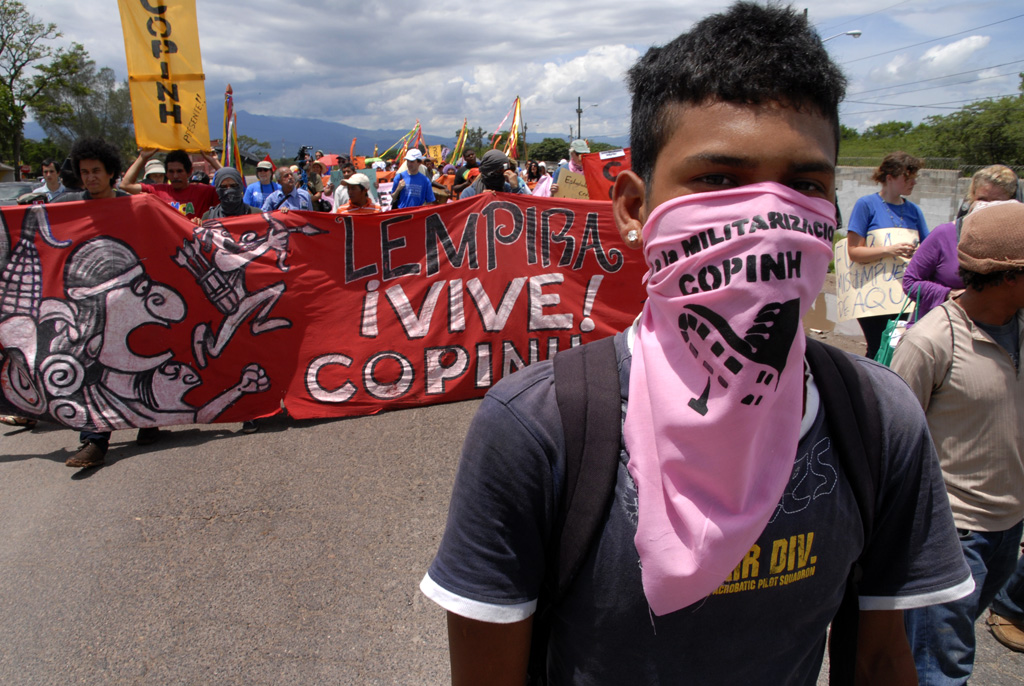 Less than two weeks after Honduras’ most internationally-recognized activist, Berta Cáceres, was murdered, another key member of the organization she co-founded is dead, killed by gunmen. Shannon Young has more.

The Civic Council of Popular and Indigenous Organizations, also known as COPINH, is rallying its members in the Honduran capital to push back against what it calls a new wave of repression targeting land rights defenders in the country.

On Tuesday, COPINH organizer Nelson García was shot dead by two gunmen as he arrived at this mother-in-law’s house for lunch. He had spent the morning helping 150 families move their belongings after soldiers and national police destroyed their homes and crops during a forced eviction from land claimed both by indigenous Lenca and an influential local politician.

The National Police, the same agency handling the murder investigation of COPINH co-founder Berta Cáceres, issued a statement denying García’s death was in any way related to the land eviction it had helped carry out earlier that day.

In an interview with the Radio Mundo Real media project, COPINH leader Tomás Gómez says the state of Honduras is operating like a de-facto, institutional dictatorship and hiding behind a veil of probable deniability.

“Because we see in places where there are wars, declared wars, fewer people die,” Gómez said. “Meanwhile in our country, where there’s not a war going on, there’s what seems like a spike in homicides and criminality. And this allows the government to have a probable deniability argument, to make it look like the state or the authorities bear no responsibility, but the demands we’ve making as COPINH, as Lenca people, are fundamentally related to the context of the murder of Berta Cáceres.”

The Cáceres family has called for an international investigation into the activist’s murder, citing doubts about the ability of Honduran authorities to carry out an unbiased investigation given her well-known opposition to numerous government policies. COPINH’s activism intensified in the wake of the 2009 coup, which led to a number of privatization policies favoring international investment and a handful of powerful families.

Gómez of COPINH says that far from dealing a single, heavy blow, Cáceres’ murder seems like an opening salvo to a campaign aimed at wiping out the organization.

“We believe it’s an avalanche that’s been set up to try to get rid of us,” he says, “to make sure that we, as Lenca people, lose our lands within Honduran territory. The state is primarily interested in taking away all the land from us that has minerals, water, oxygen, or natural resources so that it can sell off concessions. Because we already know that 35% of the nation’s territory is under license to transnational companies.”

As the Cáceres murder investigation continues, the sole witness to the crime remains under a 30-day “migratory alert” order preventing him from leaving Honduras. Mexican and international organizations have expressed serious concerns about Gustavo Castro and call for his freedom to leave the country. The Mexican environmental campaigner says he has fully cooperated with Honduran authorities and will continue to do so upon his return to Mexico, which has a legal cooperation agreement with the Central American nation.

The latest murder, however, seems to have caused at least one major investor to back out of Honduras. Citing “ongoing violence” and naming the two murdered COPINH members, the Dutch development bank known as the FMO, one of the investors in the Agua Zarca dam project Cáceres so famously opposed, announced Wednesday that it has decided to “suspend all activities in Honduras, effective immediately.”