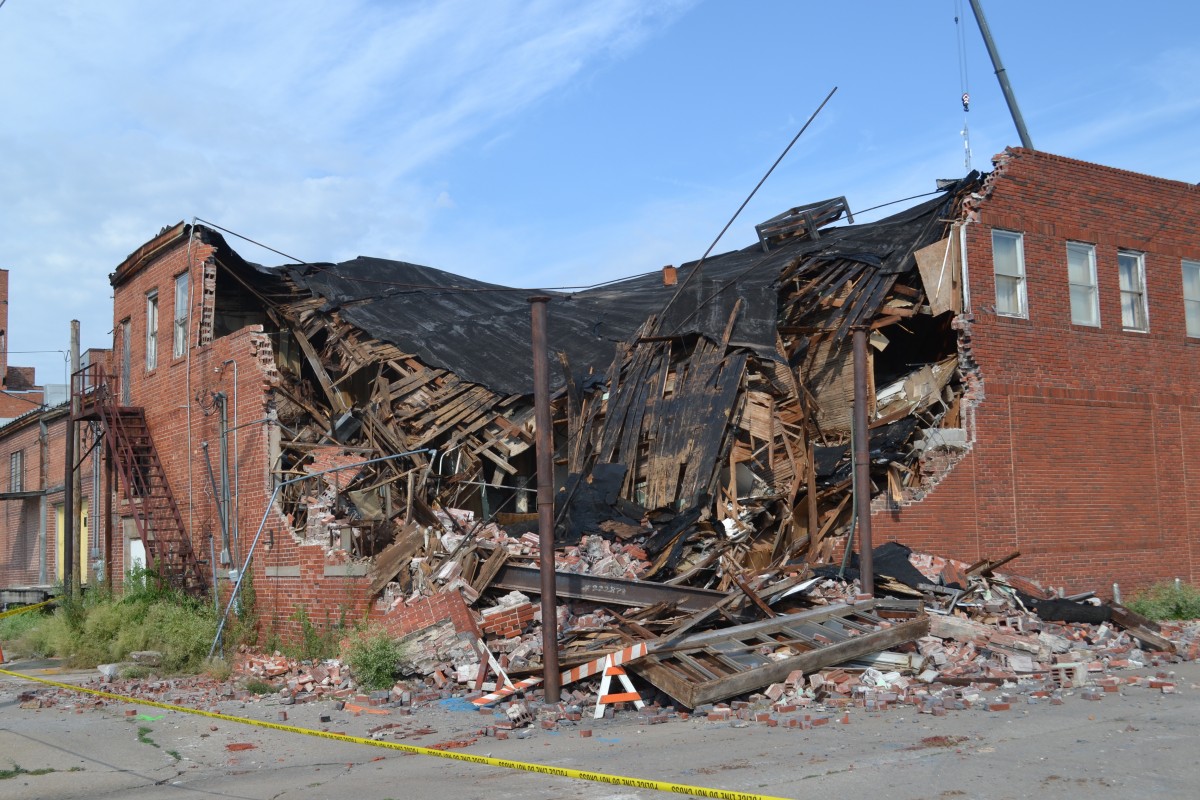 Many buildings in Oklahoma are not designed to withstand the upsurge of fracking-related earthquakes. (Photo courtesy of Ariel Ross)

In the past year, Oklahoma had more than 900 earthquakes. That’s up from only three quakes in 2007, before the dramatic increase in fracking. The Oklahoma Geological Survey says that it now “considers it very likely” that many of the earthquakes in Oklahoma were caused “by the injection of produced water in disposal wells” as a byproduct of fracking.

Last month, the Sierra Club and Public Justice filed a lawsuit against three energy companies, saying they have contributed to the huge upsurge in earthquakes in Oklahoma.

Though most of the quakes have been 3-point or less on the Richter scale, residents have started to worry about a big one damaging their homes, and even hurting their livelihoods. Some say that in a state economy built on oil and gas, ongoing fracking-related earthquakes could kill the golden goose. FSRN’s Larry Buhl has more from Oklahoma City.

In Oklahoma, the influence of oil and gas is everywhere. It’s not uncommon to see pump jacks in the middle of residential neighborhoods. There’s even an active oil rig on the capitol grounds.

People are used to the dominance of oil and gas. They’re even used to the threat of tornadoes in the spring. What they’re not used to is earthquakes.

But in recent years, Oklahoma has become the most seismically active state in the lower 48. Now that more quakes are hitting densely populated areas, Oklahomans are starting to question the state’s lax regulatory environment that’s allowed fracking companies of all sizes to set up operations anywhere, like near a fault line.

“We wonder, who is protecting us?” asks anti-fracking activist Angela Spotts, in a rally captured by documentary filmmaker Taylor Mullins. “Not the governor. Not the legislature. Not the OCC. What happens when the big quake hits? I don’t think people understand across this state how gripping that will be if the big one hits and I think it’s coming because we’re not doing anything to stop it. We don’t have contingency plans in place and we have been warned.”

Hydraulic fracturing, or fracking, injects chemical-laced water at high pressure underground to loosen shale rock and release natural gas. The wastewater is then forced back into the ground into deep disposal wells. That can act like a lubricant, making the ground shift.

After years of denying it, state officials now acknowledge the link between the injection of fracking wastewater into disposal wells and Oklahoma’s surge in seismic activity. But there’s no agreement on what to do about it.

In 2014, New York banned all hydraulic fracturing in the state. Pennsylvania has issued tougher regulations on fracking operations. Vermont banned fracking in 2012, mostly due to fear of chemicals leeching into the groundwater. And cities across the country have outlawed the practice.

Texas also instituted a similar law last year, after residents of Denton – the birthplace of fracking – voted to ban the practice in a local ballot initiative. Still, some Oklahomans are demanding stronger oversight.

Ariel Ross is a visiting professor of English at Oklahoma State University in Stillwater. She’s active in the group Stop Fracking Payne County.

“We want to make sure that everyone is protected from the earthquakes,” explains Ross. “We feel the safest way to do that is place a moratorium on wastewater injection until the situation is much more clearly understood.”

Oklahoma’s buildings weren’t designed with seismic activity in mind, especially not the amount that the state is currently experiencing. Property owners who want to retrofit their structures are on their own. And unless they have earthquake coverage and catastrophic damage, they’ll be paying out of pocket.

And if wastewater injection continues triggering quakes the entire state could be at risk.

A 2015 report from Standard and Poor’s Rating Services said quakes in Oklahoma, and in other states with man-made seismic activity linked to oil and gas production, will “have sharp economic consequences” on real estate investment, property values and job growth.

State representative Cory Williams criticizes lawmakers and the oil and gas industry for not taking adequate preventative measures, saying “I think that when we have a seismic event that causes a significant amount of damage, that will be the tipping point where the industry has kind of harmed itself and public opinion really starts to turn against it.”

Williams says there are some solutions short of an outright fracking ban, but even those ideas are meeting resistance from industry and legislators.

“We could be putting in place a tax credit associated with recycling wastewater right now. It would have a minimal impact on the state. It allows us to work out the kinks at a good time. We would be recycling our most precious resource, water,” points out Williams. “And we could roll out the horizontal drilling tax credit, which is no longer needed. We don’t need to incentivize that technology. But, we just don’t really seem to have the political courage to do those things in the state right now.”

In 2015, the Oklahoma Corporation Commission, that’s the state’s oil and gas regulator, said it would shut down fracking near the epicenter of any earthquake of 4.0 or above, but only after the second 4.0 quake occurs. That’s happened once. But most of the quakes are below 4.0, and some worry that those will have a cumulative effect on structures.

Tamara Mix is a professor of environmental sociology and social psychology at Oklahoma State University. Even when the ground isn’t shaking, she’s reminded of fracking. After she bought her house, a fracking company started drilling just across her property line.

Oklahomans shaken up by quakes can swing between fatalism, anger, fear and gallows humor. Ariel Ross keeps a bowl of brick fragments that have fallen off her walls.

“I don’t know why I keep it, I think just as sort of a physical reminder that, while I don’t necessarily feel in danger here, probably I am,” says Ross. “I think we really all are. in various ways.”