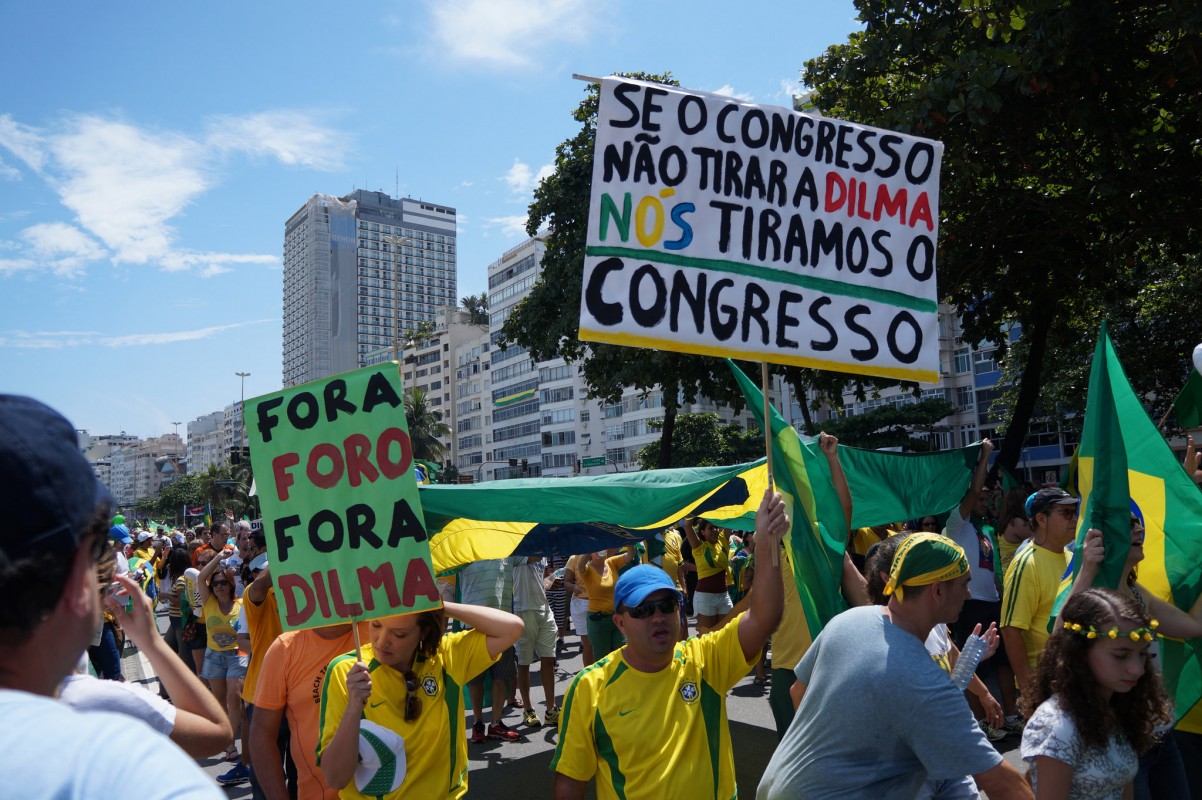 Brazil is currently reeling from political and economic crises that have left the country shaken and polarized. A two year corruption investigation into a kickback scheme at the state oil company Petrobras is coming to a head, having already ensnared dozens of the country’s business and political elites. However, many charge that the investigation is biased and politically motivated, and that protests are split along class lines. From São Paulo, FSRN’s Sam Cowie reports.

Speaking live to a news team and broadcast on national TV on Tuesday, Brazil’s president Dilma Rousseff said that she would never stand down. A crowd cheered: “There will not be a coup.”

Brazil’s current political crisis is highly complex. Broadly speaking, the country is split into two camps; those who are for and those who are against Rousseff’s impeachment.

On Avenida Paulista, São Paulo’s main thoroughfare, pro impeachment supporters are camping out in front of the headquarters of the Federation of Industries of São Paulo, or FIESP, an association of mostly privately-owned industrial interests. The organization has declared itself in favor of Rousseff’s impeachment because of a proposed tax increase.

Ricardo Rocchi, who owns a key cutting business in São Paulo, is in favor of impeachment and military intervention if necessary. He says he fears that if Rousseff is ousted, there may be some kind of counter coup attempt by government supporters, making comparisons with Venezuela in 2002.

“Today, the left wing is the same as in 1964, when they wanted to implement communism here, similar to what Fidel Castro did in Cuba,” explains Rocchi. “Now, they want Brazil to be like Venezuela: communism with a capitalist façade. In reality, it’s just robbery. Not capitalism, nor communism; just robbery.”

Rousseff is facing impeachment for allegedly mismanaging federal budgets. Her supporters point out that the impeachment charge is led by lower house speaker Eduardo Cunha, himself facing graft charges.

Those against impeachment also maintain that democracy in Brazil is under threat and say it’s illegal and unconstitutional to impeach a president who hasn’t committed a crime.

The country has recently seen huge pro and anti-impeachment protests. Surveys show that the majority of pro impeachment protesters were whiter, wealthier and more educated than the average Brazilian, earning scorns of elitism from anti impeachment supporters.

One of those at the anti-impeachment protest was Marina Tavares, a 21-year-old, public management student at the University of São Paulo.

Tavares says she is not necessarily in favor of Rousseff’s government but is totally against the impeachment process, calling it dangerous for democracy

“There is a lot to lose with an impeachment. First of all, our economic situation could get even worse as the outside world could see us in an unfavorable light and end trade agreements with us. Secondly, when the right wing controls the country, the marginalized social groups suffer,” says Tavares. “But perhaps worst of all, is that this impeachment could kick start a series of anti-democratic actions across the world. This is my worst fear.”

Pro impeachment protesters first began camping outside of the FIESP building after a series of wiretaps of conversations between Rousseff and her mentor, former president Luiz Inácio Lula da Silva were leaked to the media. Silva was had just accepted a cabinet position in Rousseff’s government, under the pretext that the popular former president would shore up support in the flailing administration.

Silva’s ministerial position would also help shield him from arrest in the encroaching corruption investigation, “Operation Car Wash,” that so far has ensnared many of Brazil’s top politicians and business elites. Silva denies all wrongdoing and says the investigations against him are politically motivated; an attempt to tarnish his reputation before he supposedly runs for president again in 2018.

Critics said that leaking wiretap conversation to the public was a grave violation of Brazil’s constitution and that Sergio Moro, the judge in charge of the Petrobras corruption investigation, who released the wiretaps to the media, should face charges.

“I cannot think of any country where leaking a conversation of the head of state to the press would be considered acceptable,” he said, before adding that such actions have potential to undermine national security.

Rousseff, a former leftist guerrilla who was tortured under the military dictatorship, is standing strong, insisting that she will never give up.

In a press conference held Thursday for international journalists, she said “I am not a weak woman.”

Brazil’s political climate has cooled slightly for now, after an explosive two weeks. The next crucial test will be to see if the controversial and scandal plagued Brazilian Democratic Movement Party, Brazil’s biggest political party, will decide to stay or split with the ruling coalition during a party meeting on March 29.