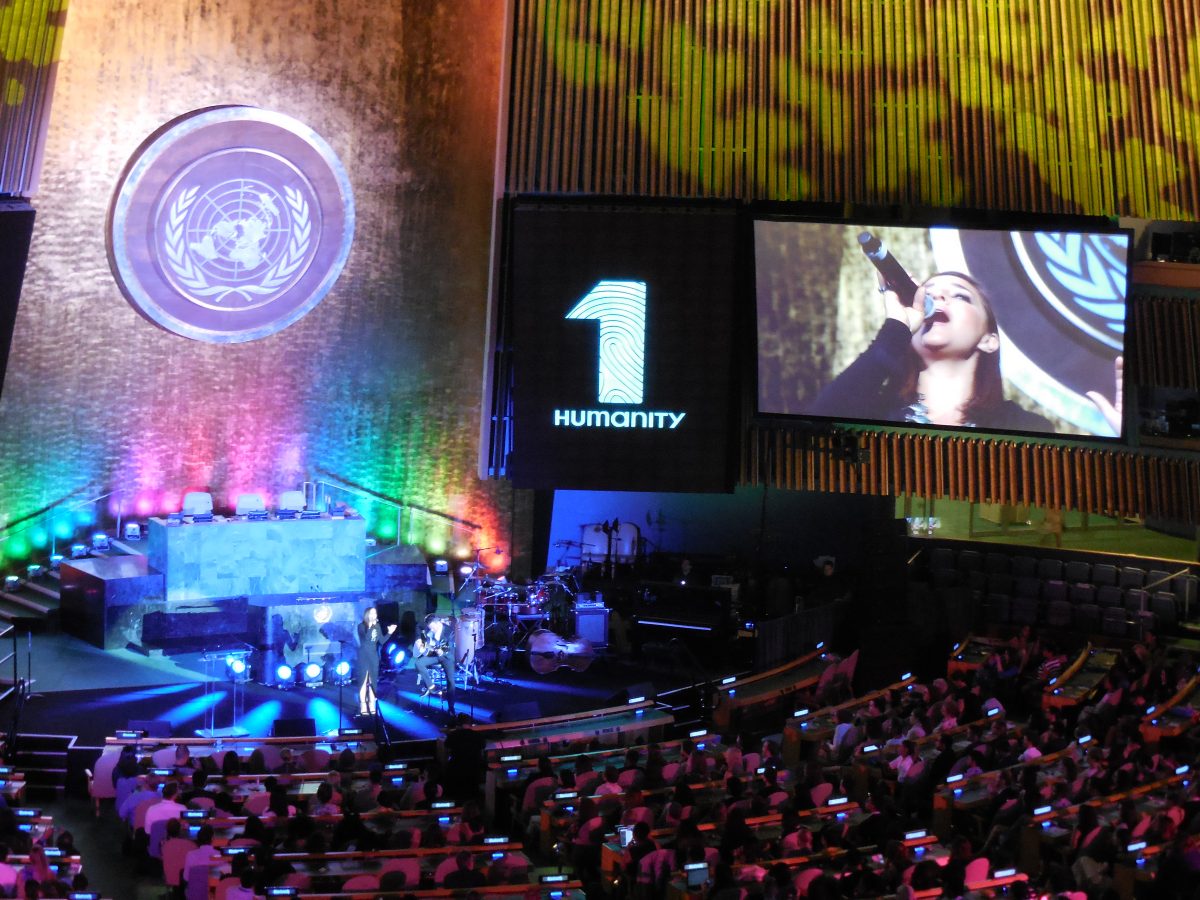 Alison Porter, a winner of the reality TV-show, “The Voice,” sang "Somewhere Over The Rainbow" during the UN's World Humanitarian Day. (Photo credit: Patricia Nunan)

The reputation of UN peacekeepers reputation suffered another blow with blue helmets in South Sudan failing to protect foreign aid-workers in a recent attack. The United Nations says it’s investigating the incident which it did not publicly acknowledge until after The Associated Press published an investigation that described a rampage by uniformed soldiers in an aid workers compound.

Rights groups say the worst part of the attack at the Terrain hotel in the capital Juba, is that it was all but predicted by events that preceded it.

“You can just count off the incidents,” says Akshaya Kumar with the Deputy United Nations Director for Human Rights Watch, which interviewed multiple victims in the July 11 attack. “Before this Terrain hotel incident, there was an incident in Malakal, where government soldiers – or at least men in government soldier uniforms – stormed a UN base for hours, shot at civilians, burned their dwellings and homes, forced them to flee.”

That attack in Malakal, which targeted South Sudanese civilians, was back in February.

Fast forward to July and for three days aid-workers in the Terrain hotel were holed up in the compound as deadly clashes between soldiers loyal to South Sudan’s president and a rebel faction raged outside.

Then, an investigation by The Associated Press reveals, around 100 South Sudanese soldiers stormed the compound. They shot dead a local journalist from a rival ethnic group. They beat foreign aid-workers, shot some, staged mock executions and gang-raped women.

This went on less than a mile away from a base of armed UN peacekeepers, survivors told the AP. They thought the peacekeepers would protect them as after all, some at the Terrain hotel worked for the UN.

Instead, trapped aid-workers spent the four hours of the siege trying to hide while sending urgent Facebook and email messages to the U.S. Embassy and UN base.

Yet the peacekeepers did nothing – until the attack was over. Kumar says that’s the exactly how peacekeepers acted earlier this year in Malakal.

“Very slow, refusing to engage for hours and hours, questioning chains of authority and command,” says Kumar. ”The UN did an investigation and pointed out all these flaws. And just a few months later, we see the same problems surface again.”

So far, the Secretary General has a statement saying he was alarmed about the attack which he had not publicly acknowledged until after the AP published its report.

That’s Alison Porter, a winner of the reality TV-show, “The Voice,” at the United Nations headquarters in New York. She was one of a handful of celebrities taking part in “World Humanitarian Day,” an annual event to commemorate the lives of aid-workers lost in the line of duty.

Speakers included UN Under Secretary General for Humanitarian Affairs Stephen O’Brien who acknowledged the incident, saying, “As recently as last month there was a brutal attack on aid-workers in Juba, where one of our fellow humanitarians was killed, and several were raped and assaulted. This is a grave atrocity on aid-workers who have committed their lives to serving humanity. We must pursue and bring to justice the perpetrators.”

But aid community veterans say justice, in any form, may be hard to come by.

“So much of these situations, and ‘duty of care’ and the UN is often quite ludicrous,” says Megan Nobert, director of “Report the Abuse,” an organization that supports aid-workers who have survived sexual assault.

She says the UN and other international aid agencies are notoriously ineffective when it comes to providing support to their staff who suffer trauma or sexual assault.

Nobert has no direct knowledge of what support – if any – the aid workers from last month’s attack are receiving. But she says there’s a trend among aid organizations and the UN to put contracts for international staff under local law – to protect from legal liability.

“Often we work in countries where the justice system does not function. I mean, not in criminal law, let alone on ‘HR,’ or civic liability, or human rights, or constitutions,” Norbert explains. “So these situations are being created where it’s easier for organizations to get out of their duty of care, to reduce their liability, to have to do less.”

The UN is investigating and it’s not clear when it will release its report. The South Sudanese government says it’s also looking into claims, but has questioned whether the uniformed soldiers were government troops.

In the meantime, the UN has persuaded the South Sudanese government to accept another 4,000 Blue Helmets to bolster the nearly 14,000 already stationed in the country.

That may make little difference to the security situation or the safety of aid-workers, if there’s another crisis and the armed peacekeepers fail to respond.