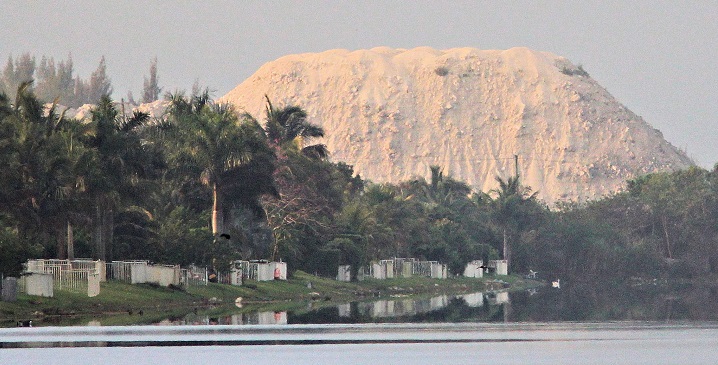 The sinkhole opened beneath a waste stack much like this one outside Miami, Florida. (Photo Credit: Kenneth Cole Schneider via Flickr Creative Commons)

More than 200 million gallons of contaminated water has poured into the subsurface drinking water aquifer just outside Tampa, Florida. It’s a result of a massive sinkhole that opened underneath a mountain of waste built up in the process of mining phosphate to use as fertilizer. FSRN’s Seán Kinane reports the multinational fertilizer company, Mosaic, is apologizing to residents for poor communication about the sinkhole but claims the contamination has not spread beyond company property.

Now the company is trying to explain the communication lag. Mosaic did quickly notify county, state and federal authorities, but apologized Tuesday for taking two weeks to inform the public.

Hershel Morris, vice president of phosphate operations for Mosaic, told the Polk County Commission that they began pumping water out of the aquifer by the second day, and haven’t detected contamination outside of Mosaic property.

Mosaic is mining tens of thousands of acres in Florida leading to what some environmentalists describe as a moonscape in place of the state’s natural wonders. Dozens of feet of topsoil are removed to get to the phosphate rock, which is processed to make fertilizer. The waste is packed into 120-foot high hills that resemble landfills covered with slightly radioactive water.

The giant sinkhole formed under one of these “phosphogypsum stacks” in August, sucking the water hundreds of feet down into the Floridan Aquifer. The aquifer is essentially a series of interconnected rivers flowing underground.

Some residents, like Paula Largel, are upset about miscommunication and concerned that the company won’t be able contain the contamination.

“I understand that you don’t want widespread panic when something like this occurs,” Largel says. “But by not informing the citizens, the result is frustration, fear, mistrust and anger.”

The company is offering to test nearby drinking water wells for contamination and to give residents bottled water.

The sinkhole is 45 feet wide. Mosaic’s Morris says the company plans to plug it, perhaps with a cement-like material.