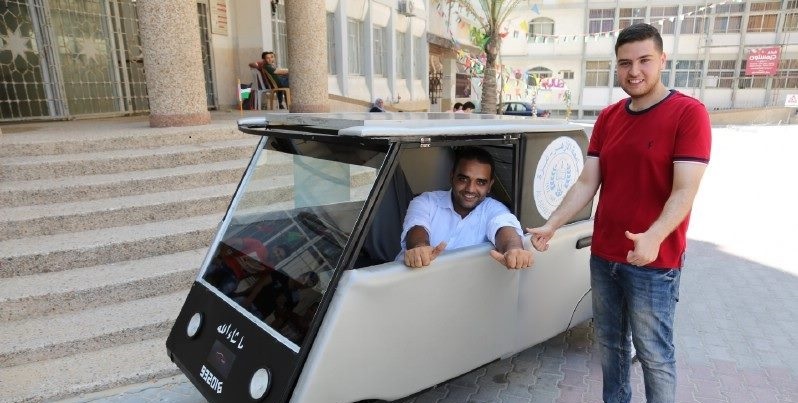 A graduate student of Information Technology in Gaza has developed a car that runs on solar energy. The car can only carry one person and isn’t yet ready for industrial manufacturing, but it’s an example of ingenuity in the face of scarcity. FSRN’s Rami Almeghari has more.

The small, solar-powered car parked outside Jamal Meqaty’s home in Gaza City has been the talk of the town since the student unveiled it last month at Alazhar University.

Meqaty and a classmate, Khaled Albardaweel, made the vehicle over the course of a year with help from their electromechanical engineering professor. While it would be logical to think the idea for the car came in response to the region’s chronic fuel shortages, Meqaty says his quest to develop it pre-dates the Israeli-enforced blockade.

“Actually, I first thought of making a car that runs on water, then one that’s wind-powered,” Meqaty recalls. “I mainly wanted to create a car that doesn’t run on fuel, because I personally don’t like gas emissions.”

The use of solar energy has increased in Gaza to help cope with electricity shortages and the lack of fuel for powering back-up generators.

Despite the interest the car has generated, Meqaty says it’s not something that can be manufactured in Gaza under current conditions.

“Only spare parts are available here and it’s impossible to order specific parts. We are not a normal market,” Meqaty explains. “For example, I’ve been waiting for months now for a small piece of hardware that I ordered online for $25. I have yet to receive it”.

Jamal’s father, Mazen Meqaty, says he personally contributed more than $2,000 towards the development of his son’s prototype car.

“We were the first to see the car running and it was impressive. As a father, I felt proud to see my son realize his dream of making the car, to the extent that it brought me to tears,” says Mazen Meqaty. “This has been my son’s dream since he was in the fifth grade. I have managed to help him with this project’s needs, including the financial support.”

Jamal’s father also brought his own expertise to the project. He’s an electrician and handled the car’s wiring from start to finish.

Information Technology Professor Dr. Mazen Abu Ummer, who mentors Jamal at Gaza’s Alazhar University, says students worked around limitations on importing certain parts by handcrafting them: “Some minor spare parts have been redesigned by the students themselves, with the help of metal workshops. Currently, local traders here cannot import those parts. For example, the students lacked a bearing, so they made it themselves, at a local metal workshop, so that they could use it in their own project.”

The one-passenger car runs on an electric wheelchair motor the students modified and adapted for the project.

Meqaty’s model car can only reach a speed of around 16 miles per hour, but he hopes to one day improve upon the design to make it faster and accommodate more than just the driver.

Realizing those plans will largely depend on access to materials that can only come with the lifting of the nine-year-old blockade.