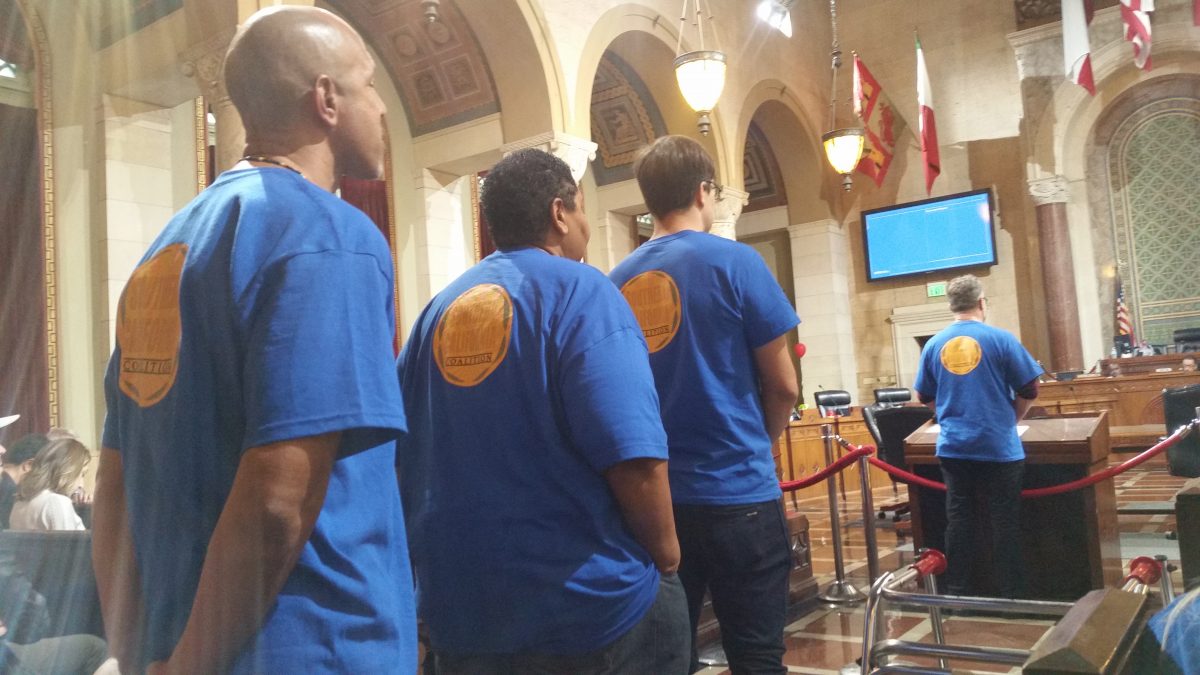 As California prepares to vote on legalizing recreational marijuana, the state’s thriving medical marijuana industry is scrambling to prepare for the impending sea change. In Los Angeles, less than 150 of the city’s hundreds of dispensaries are officially recognized by the local government. Legislation being written now will determine what the city’s medical marijuana industry will look like after November – and a battle is brewing between licensed and unlicensed business owners over who should write that legislation, and what it should say. Carla Green reports from Los Angeles.

Dozens of people crowd into a room on the third floor of city hall in Los Angeles. They fill rows and rows of benches, some wearing suits and ties, others wearing bright blue shirts with orange writing: Southern California Coalition.

A man in a suit steps up to a microphone at the front of the room.

“You know, I’ve been coming here for ten years,” says Carlos Delatorre, a marijuana dispensary owner and an executive board member of the United Cannabis Business Alliance, or the UCBA.

Over the past ten years, Los Angeles has effectively had a tiered system for marijuana dispensaries. Hundreds of dispensaries operate in the city, but only about 135 of them are officially registered.

And even those 135-or-so dispensaries exist in a kind of legal gray zone, they have something called “limited immunity” from prosecution. The rest have no protection at all. And that number – 135 – it’s an arbitrary one. It’s just the number of dispensaries that are still open now, and that managed to fill out the paperwork in time back in 2007 when the limited immunity system was set up.

Now, under statewide regulations passed last year, medical marijuana businesses will have to register at both the state and local level to get actual licenses – not just limited immunity and recognition from the city. Just what that regulatory system should look like is what everyone is so worked up about.

At the meeting, one after another, speakers in blue shirts line up at the microphone to lay out their opposition to the UCBA’s ordinance.

Yami Bolanos is a dispensary owner and founder of a medical marijuana trade organization. Like Delatorre, Bolanos’s dispensary is one of the 135 with limited immunity – she would get priority for licensing under the UCBA’s ballot initiative. But she’s against it anyway.

She also also takes issue with another provision in the UCBA initiative. One that says there must always be a manager on site who hasn’t been convicted of a drug-related felony in the past ten years. Lots of people who’ve been in the medical marijuana industry for a while have drug-related felonies, Bolanos says.

Especially because decades of drug war policies have shown that African Americans and Latinos are far more likely than whites to be convicted of drug-related crimes, even though drug use is more or less equal across the demographic groups. And as the state prepares to vote on legalizing marijuana for recreational use, felony-related restrictions, like the UCBA’s, could end up excluding some people from a potentially lucrative new, legal industry.

Cat Packer works at the Drug Policy Alliance in Los Angeles. And she says the DPA opposes the ballot ordinance for many of the same reasons Bolanos does. It’s exclusionary – unnecessarily so, she says. Like – the felony provision.

Delatorre says the ballot initiative language is meant to open up licensing opportunities to more than just 135 dispensaries. But he does think those who are registered with the city and have been following the rules should get priority for licenses under the new system.

“I find it quite curious that a lot of these other dispensaries, who, quite frankly, don’t pay any of their taxes – I can’t say all of them, but we all know that this industry has been overwrought with a proliferation of what the city calls ‘rogue dispensaries.’ So, how do you work from there? How does the city grant some kind of a license – how does the city reward someone for their bad behavior?” Delatorre asks.

He says the UCBA wrote its ordinance just to get something on the ballot. If people don’t like the UCBA’s ordinance, they should write their own, he says.

And it looks like that’s exactly what’s happening. At a meeting this week, the Los Angeles city council voted to put its own marijuana regulation initiative on the March 2017 ballot. Right alongside the UCBA’s.