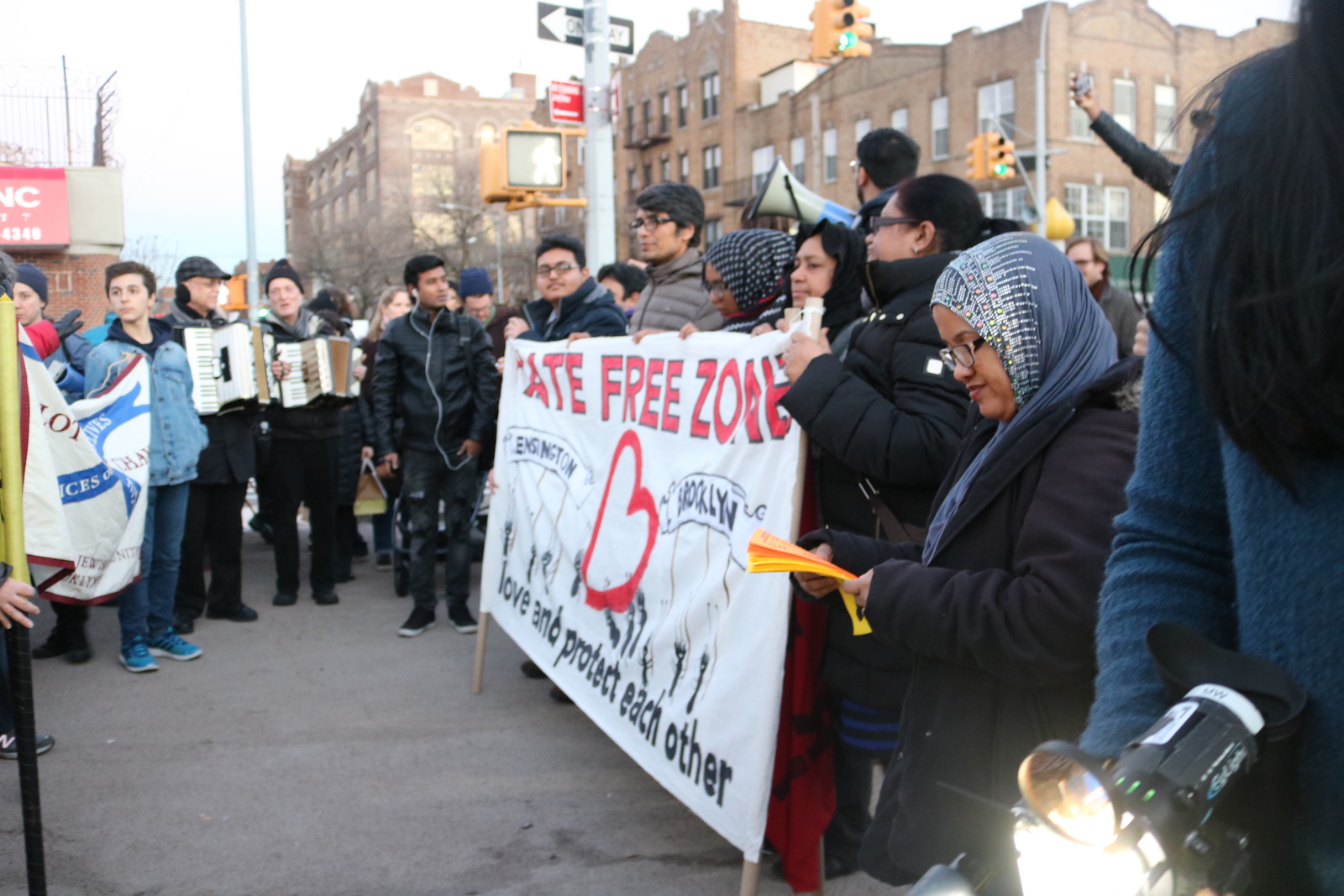 A "Hate Free Zone" set up by community groups in Kensington, Brooklyn on Wednesday, January 25, 2017, as part of a nationwide protest against the Trump administration's policies. (Photo credit: DRUM NYC)

In Brooklyn community groups are joining forces to launch a “Hate-Free Zone,” as a part of what they call a “national defense movement against the Trump administration’s policies of xenophobia, racism, and bigotry.” It’s just one of many local reactions to the president’s latest executive orders aimed at undocumented immigrants. In cities across the country from New Haven to Chicago to Los Angeles, local officials are responding to Wednesday’s action in which Trump said federal funding would halt for “sanctuary cities.”

The state of California has come out swinging against the policies of the Trump administration. That includes a fiery speech from Governor Jerry Brown this week in which he said “California is not turning back, not now not ever.” The Golden State has already hired former U.S. Attorney General Eric Holder to stand legal guard against any federal directives that conflict with the blue state’s progressive policies.

Local governments around the most populous state in the nation are also drawing lines in the sand. Shortly after the election, the LA City Council created the Ad Hoc Committee on Immigrant Affairs. FSRN’s Lena Nozizwe reports that’s where law enforcement, educators and social justice activists gathered last night in the wake of President Donald Trump’s executive orders on immigration policy.

On the same day that President Donald Trump signed executive orders to immediately begin construction on a wall along the U.S./Mexico border, increase the number of immigration agents to facilitate more deportations and punish so-called sanctuary cities, Los Angeles lawmakers were building their own wall to thwart Trump’s sweeping directives regarding the city’s undocumented residents.

“This is what I call institutional resistance,” said City Councilman Gil Cedillo, as he opened the first meeting of the newly-formed Ad Hoc Committee on Immigrant Affairs by recalling a conversation he had with a prominent LA businessman shortly after the presidential elections.

“He said, ‘Look, councilman, we are either resisters or collaborators.’ He said, ‘We are either resisters or collaborators,’ Councilman Cedillo recalled. “I said ‘Okay.’ He said ‘I want to say this to you because my grandparents told us that, when our family was in Nazi Germany, there were those who believed they could work with the Nazis and that did not work out for us. So we have a decision and a choice to make. To resist or to collaborate.’”

Resistance was the common theme in the standing room only LA City Council Chambers Wednesday night.

The Migration Policy Institute estimates that of the 11 million undocumented residents thought to be living in the U.S. – about one million call Los Angeles home. They have the ear of a city council that includes member David Ryu, an immigrant from South Korea.

“I am quite frankly stunned and overwhelmed by emotion,” Ryu says. “But my heart especially breaks for the millions of people, especially the children, who are going to go to bed afraid tonight because they feel uncertain about their futures.”

During the presidential campaign, Trump vowed to build a massive deportation force to expel millions of undocumented immigrants “humanely.”

The two executive orders issued Wednesday lay the groundwork for the mass detention and expulsion of so-called “removable aliens” and the expansion of immigration detention facilities along the border.

Since the election, Cal State Fullerton Professor Christine Valenciana has been hearing from fearful students.

“I feel the tenseness. I feel the hysteria,” Valenciana says. “I got an email from a student the other day: ‘What am I supposed to do? I know you’re interested in these kinds of things.’”

But the White House has indicated undocumented immigrants convicted or suspected of criminals offenses will be prioritized for “prompt removal.”

Since the election, the LAPD leadership has made it clear that it does not believe the department is responsible for detaining rounding up immigrants, no matter what their legal status.

In fact, the city’s police officers are specifically prohibited from initiating contact based on suspected immigration status under a 1979 provision known as Special Order 40.

Deputy Police Chief Robert Arcos explains why it’s important to keep federal immigration law enforcement separate from the duties of local policing: “We must rely on the partnership and cooperation of all the diverse communities in Los Angeles. Victims of crime, especially those who can be exploited because of their status and are vulnerable to harm, must not fear calling the police for help. Witnesses to crimes similarly must not fear calling the police or testifying against the accused in criminal courts if we are to keep our communities safe.”

The executive actions Wednesday directly target so-called sanctuary cities by seeking to cut off billions of dollars in federal funding for some 400 jurisdictions, where local governments prohibit spending their resources on immigration law enforcement. Many of them are found in states that did not vote for Trump.

A defiant LA City Council, working with the county, has already put aside $10 million to assist anyone who needs legal help to fight deportation.

With just one week into the opening salvos of what is shaping up to be a huge battle between the federal government and local municipalities, LA is but one of hundreds of municipalities already resisting across the country – hoping to prove the adage “you can’t fight city hall.”